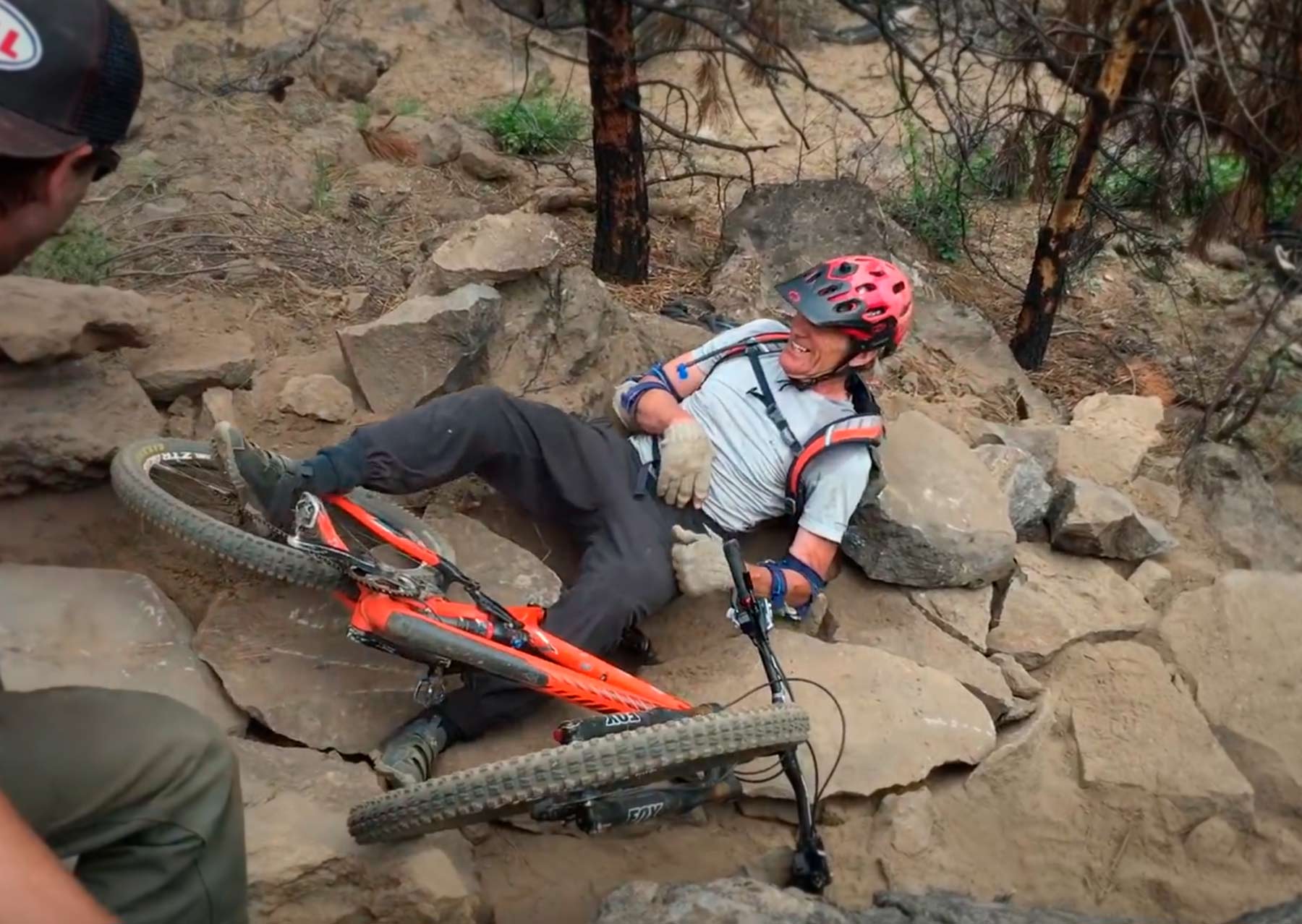 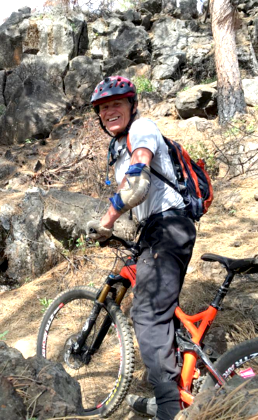 Ever since the short section of the COD Reroute (aka Rockstacker) has been open, almost every time I am working on the trail, an older gentleman comes riding along with what looks to be volleyball elbow pads, smiles, and continues on – unfazed by the challenging terrain. My first encounter with him was when he was heading West on the trail and had to stop because I was in his way. He asked what the trail was and I gave him the low down. I warned him that coming up was a rock feature involving a difficult climb up over a large boulder. Made even more challenging due to the techy approach.

He thanked me and rode on. 20 minutes later he came back the other way, much to my amazement.

I yelled out “back for more?” and he stopped and explained that he attempted the 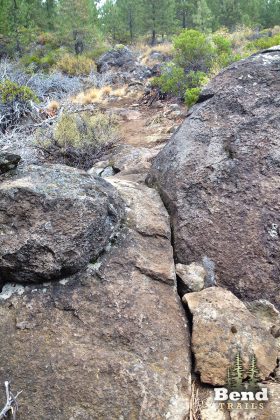 rock-over 4 times before making it up and over. I gave him praise and we chatted for a while. He said he loved COD and appreciated this new section of trail. A week later I saw him again. I was on the uphill side of the same rock feature working. I was standing there motionless about 30 feet from the boulder and I watching him approach it in a very low gear and in one attempt he was up and over!

I was pretty blown away at this guy. I stopped him and asked him what his name was. “John Anderson” he says. I figured he had to be in his mid 60’s. The only other guy who was this age and riding this well that I know is Don Leet, ex-racer and ex-Sunnyside Sports owner. Over the next few months I would see John several more times. Always on COD. Always an out-and-back apparently.

A couple weeks ago at the COTA Spring Fling, Jay, Todd and I worked on another section of COD which was rerouted last Fall dubbed “the Dip” on Strava. This short section has a couple steep, armored pitches and a massive amount of rock armoring. Both steep climbs are pictured below. Half way through the day I was showing Todd and Jay the beginning of the trail on the West end and  John Anderson rides up heading West. I say “John Anderson!” — much to his surprise. We talk for a while and I ask him his age (I don’t have much tact). “68” he says. He’s been mountain biking for 2.5 years! 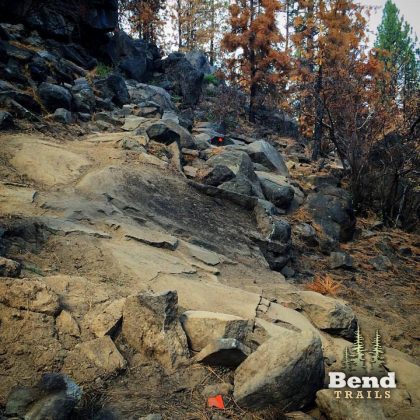 One of 3 steep pitches on the DIP re-route

He rides off on the Dip re-route and easily clears a small step-up and then in a spot with no feature at all he loses balance and falls sideways off the bike into a burned manzanita. Ouch! Running to his rescue we see that he’s unharmed. We help him to his feet and all share a laugh at how he fell on the easiest part of the trail. Then in John-style he backs up a few feet, jumps on his bike and takes off. 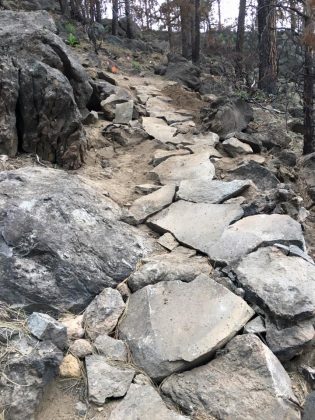 As usual he returns from his out and back on COD, and he has to stop as we are working on the last armored pitch (shown to the right). It’s not as steep as the first pitch but it’s about twice as long. Easy to descend but more challenging to climb.

Todd and I move a couple rocks into temporary positions and tell him he can give it a go if he chooses. Note that the top 4 feet or so were un-finished.

He backs up a few feet and makes an attempt. Nope. Couldn’t get his feet into the pedals fast enough. He steps back a few more feet and tries a second time. Again the pedals. Backs up even further.

Then attempts a 3rd, 4th and final 5th attempt. The last couple he was getting all the way to the top of the armoring and then getting stuck in the sand. Below is a video of his last attempt in which he fell over trying. Beast!

I’m not the type who typically tries over and over to overcome an obstacle (on the same ride). After watching John I figured I would attempt the other steep pitch shown above with the 2 pin flags. Jay had made it several times on rides, so I knew it was doable. I had attempted it 2 or 3 times but had not even come close. This climb is steeper than the photo suggests.

Below is a video I made of 10 attempts. I look like an idiot. Sorry for the vertical orientation of the video. It’s the only way I could prop up my phone on a tree branch ;)

Thanks for the inspiration John. I hope I see you many more time on COD rocking those elbow pads!

This article was contributed by Joe Myers. Joe is a COTA crew leader and trail adopter for COD. He has been publishing trail reports, photos and maintaining trails in Central Oregon since starting BendTrails in 2012. When off the bike he works as a 3d designer/animator at Sketchbook, Inc. 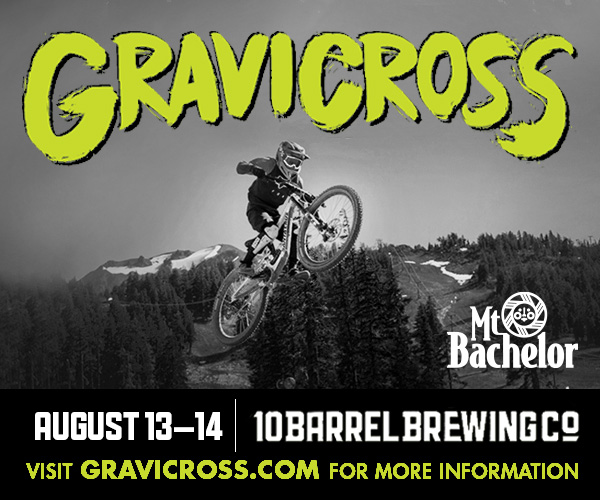 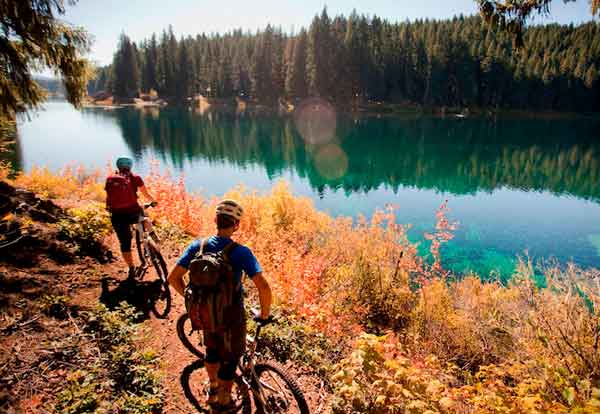 Horse Creek Lodge & Outfitters has bike rentals for only $65 per day, so you can soar down the McKenzie River Trail, O’Leary Loop Trail, or Olallie Trail on a high-quality mountain bike. Ask about our kids bikes too!