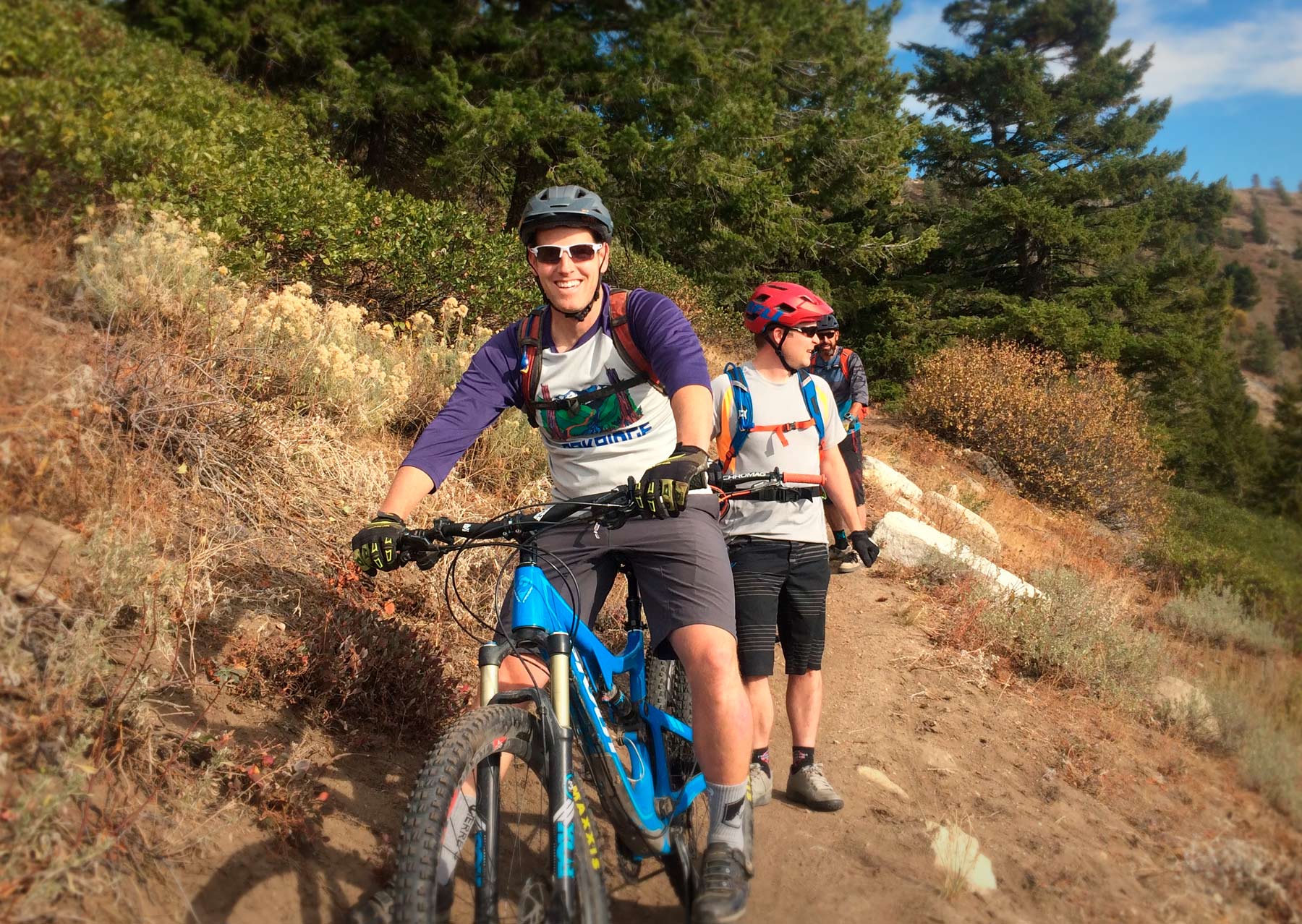 In June of 2017 Joe and I got a DM on Instagram from Kirk Cheney and Jason Delgadillo, a couple of guys we knew from BoiseTrailPics. They said they were coming to Bend with some friends and wanted to meet up for a ride.

Joe was out of town, but I’m always looking for any excuse to ride my bike: “Sure thing, I’m in!” and I met them at Wanoga late one day after work.

They wanted to ride Funner, which seemed like an odd choice for someone to pick at random, so I asked if they chose it just because of the name and they admitted that they did. Long story short, I took them to Tyler’s and we had a ripping good time and it was clear that their whole posse had some solid skills and a lot of fun on bikes (and would probably love Funner).

Back up to Wanoga, we did two fast laps on Funner before the sun went down. We all high-fived and said we’d ride again some time, and if I ever got to Boise to hit them up. 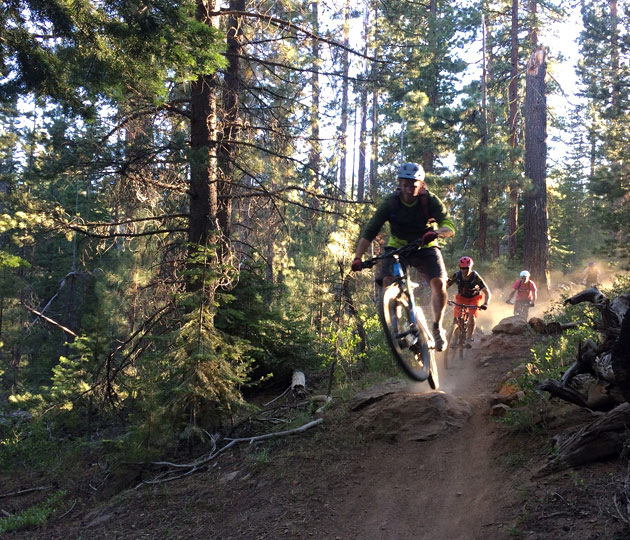 A few weeks later I got an email from Jason and he wanted to chat about a marketing idea he had. Marketing is my day-job at Delicious Design and he’s a cool guy, so told him I was happy to jump on a call and share what I know.

It was pretty clear that Jason and Kirk were a lot like us. They love to mountain bike, are first-rate trail ambassadors, and had a strong following on social media where they share their passion for Boise’s trails and the MTB lifestyle.

You Probably Know Where This is Headed…

I asked them, “Why don’t we build a version of BendTrails.org, but for Boise? You guys can populate it with great trail information and curate content specific to Boise and your community.”

After a bit of back and forth we started talking in serious terms about what was involved to get a project like this off the ground.

While it probably looks simple to the end-user, a website like BendTrails is a BIG project. Both the content and the underlying code are formidable obstacles to overcome — and require time, commitment, and money, to launch.

“Everyone here at 10 Barrel is excited to see this site rollout for the Boise community to provide a fun tool and asset for all the bikers and trail users in the area,”

We’ve had a really great relationship with our title sponsor 10 Barrel since we first launched and knew they had a new brew-pub in Boise — and were passionate about the outdoor lifestyle — so Valerie approached them about helping us get Boise Trails up and running and they were really interested in the concept.

Greenlight! Me and T-Bone (our code wizard) got to work right away. Originally, we planned to clone BendTrails, wipe out the content, and turn it over to the Boise team. But T-Bone and I are both OCD and the Boise guys brought some fresh ideas to the table, so we built Boise Trails from the ground up — and now that it’s done, we’ll roll the new and improved code back into BendTrails. But I digress… because, you know, OCD. After about four months of hard work and collaboration, the site is now live. 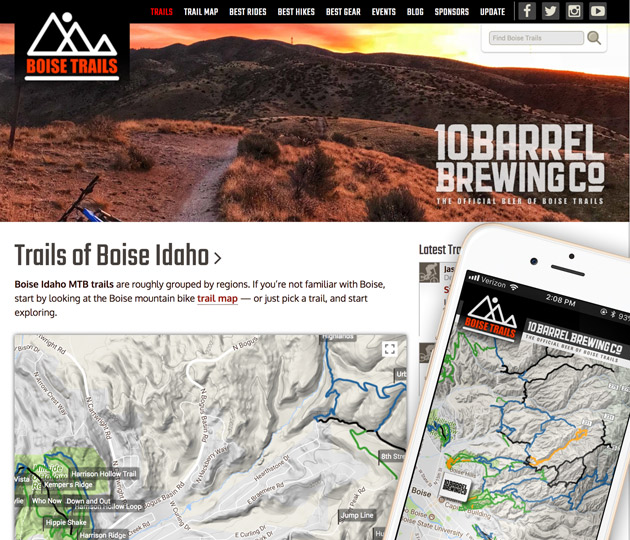 The Boise Trails website will feel familiar to our BendTrails users — but, it also includes some nice upgrades which we’ll be incorporating into BendTrails in the spring. The site will launch with over 140 trails!

“Boise’s trail system is an awesome asset. Hundreds of miles of trails accessible right from town — and more than a hundred individual trails,” says Jason Delgadillo, one of the founders of BoiseTrails.com. “Like thousands of other Boise locals, our group of buddies uses the trail system multiple times a week, for mountain biking, running, and hiking. We kept getting questions on Instagram about recommended routes, trail conditions, etc. So we realized people want good, comprehensive and current trail intel, and we could help with that.”

Co-founder Kirk Cheney elaborated: “Boise is lucky to have the hard-working folks at Ridge to Rivers, who care for the trails and provide information to the public. But their numbers are finite and the network of trail users is vast. We figured we could tap into that network and allow users to update each other about trail conditions. On top of that, we could add our library of trail photos and videos, so people researching trails could get a better idea of what to expect.”

So How’s the Riding in Boise? 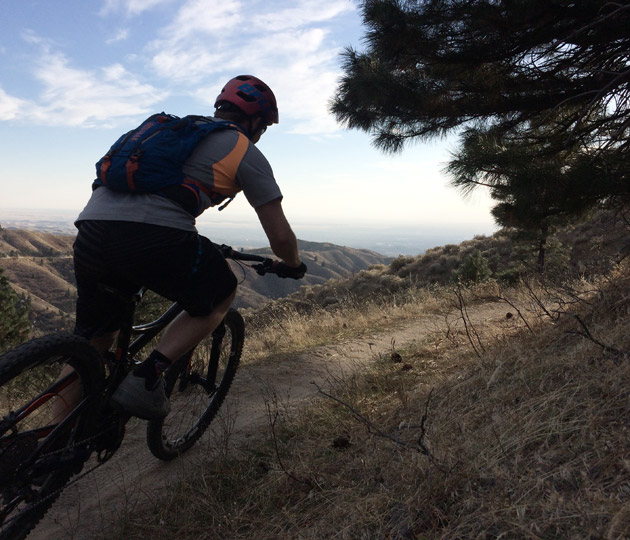 Here’s where you leave the forest and start the Sweet Connie downhill. 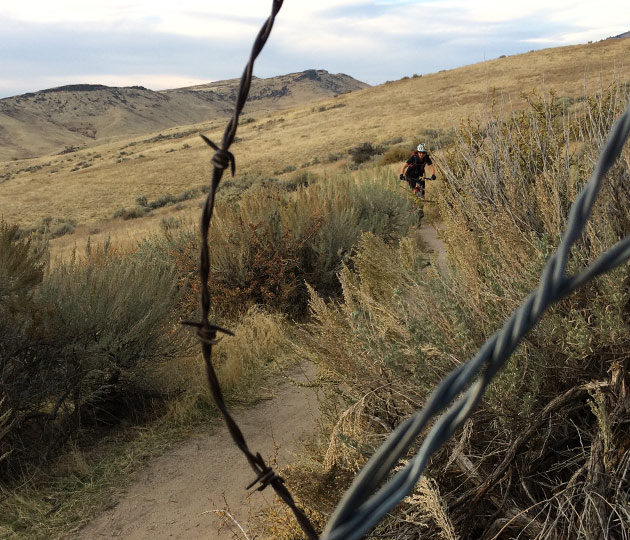 On our way to Moab this summer we stopped over in Boise to sample some of the local trails and were really stoked about them. 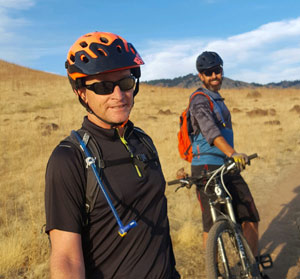 Here’s me and Jason at the bottom of a long downhill section of Sweet Connie. We both look pretty happy because that trail was super fun.

The terrain is not at all like Bend. As an outsider, it seemed that the foothills of Boise were steep, open, grasslands, with narrow ribbons of single track cut down every ridge and valley, with the occasional huge cow standing off to the side — an amazing amount of trails right outside of town that is enjoyed by all kinds of trail users.

We did one long-shuttle from Bogus Basin where the trails started with jumps and berms, then singletrack that twisted through an alpine forest, until we suddenly popped out of the trees and onto a ripping descent of Sweet Connie.

With only a few hours to ride we didn’t get the full sampler on this trip but definitely plan to head back to Boise next spring.

This article was contributed by Robert Rekward. Robert is part of the team that created the BendTrails website. During business hours you can find him at Delicious, a marketing company here in Bend which he owns with his wife, Valerie. If it’s not business hours, Robert’s probably on his bike. Or in the garage, working on his bike. 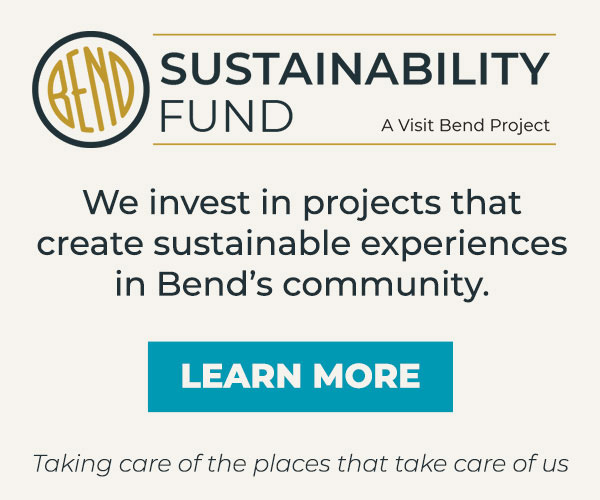 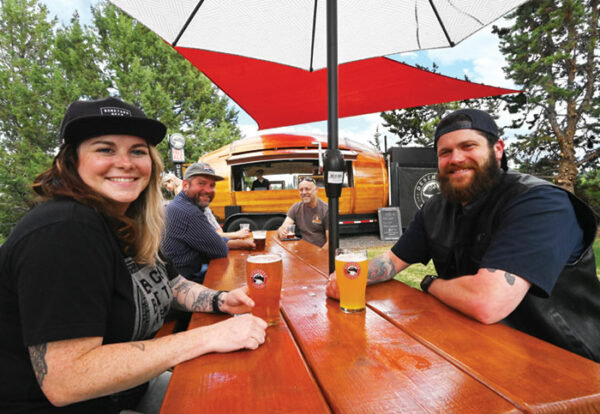 Check out our brand new outdoor BEER GARDEN (next door to the Tasting Room)! Enjoy a wide variety of outdoor games, beautiful views, damn tasty beer, and to top it all off, Bleu Rooster Food Cart!